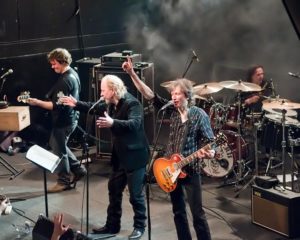 The band was formed by five professional musicians who had gathered years of experience by playing in various other groups (ex-members of Gunnar Graps Band, Music Safe & Tõnis Mägi, etc. all well known bands in the 1980’s Soviet Union and later Russia).

In the 90’s Kolumbus Kris committed hundreds of live gigs on various stages and clubs all over Estonia. Also international showcases all over Scandinavia: touring Finland, Sweden, playing in clubs as well in MC meetings (among them all-European SuperRallye’97 in Sweden). In the mid 90’s, while the band toured Sweden’s clubs and pubs, they also gave several prison performances. Later followed by several club gigs in Denmark and music festivals in Moscow, Russia.

In 1991 Kolumbus Kris performed at SXSW festival in Austin, Texas, USA. After that they spent 2-3 weeks in Austin, playing clubs and jamming with local musicians.

Kolumbus Kris was a warm up act for Whitesnake at their Tallinn gig in 2004.

From the beginning of 90’s Kolumbus Kris has consigned several recordings covering blues classics and also their own material. They released a couple of vinyls and several CD’s:

2005 saw the release of another CD “See on voodoo”, their first record with only estonian lyrics. The songs were recorded and mixed at Seawolf studios in Helsinki, Finland. At the same time the legendary Hanoi Rocks was preparing their new material in the same studio. They made friends with Kolumbus Kris and both Michael Monroe and Andy McCoy played some instruments on the “See on voodoo” CD.